A city with many identities, and none

Leipzig is a mix of bleak East German aesthetic and the chic savvy of the Internet age. And underneath it all is a sense of bitterness.

LEIPZIG, Germany - Investors whisper in baroque cafes, unfolding blueprints for this restless city where Faust sold his soul to the devil and Porsche and BMW factories rise like sleek music boxes on the outskirts.

Leipzig is a city unfinished.

The romantics spun poetry here. The communists came and went, but the town's penchant for commerce has endured, making it one of the few successes to emerge from the former East Germany. The Leipzig spirit is so bold that it challenged the capitals of the world to host the 2012 Olympics.

"Someone once said Leipzigers were megalomaniacs with pleasant dispositions," said Mayor Burkhard Jung. "We have to have the biggest train station, the biggest town hall, the best university."

From its ornate center to its coal-dusted neighborhoods, Leipzig is a metropolis of converging identities.

One Leipzig is the numbing rectangles of communist architecture and unskilled factory workers who didn't flee west after the Berlin Wall fell. It's a place of 19 percent unemployment and 50,000 vacant apartments, where streets echo with the scrape of backhoes and bricks tumbling from buildings under demolition.

The other Leipzig is a mix of martini-chic and bohemian aloofness, where girls buy the cheapest trinkets in designer stores just to walk out with the bag. Vegetable markets and Old World facades blend incongruously with the chrome angles of new offices housing Internet startups, law firms and venture entrepreneurs.

"If you want to be a successful businessman, you will ultimately stumble upon Leipzig," said Rene Holzer, a founder of Nutzwerk, which developed an anti-virus computer technology. "But there's also a generation of unemployed that will not go away. You feel sorry for the older ones. My parents are jobless. ... They are the ones who hoped for change but didn't profit from it. The younger generation has profited and I think our parents are bitter."

That is the narrative of the former East Germany, a region left surly by years of capitalism and scurrilous Western speculators. Leipzig has its share of disenchantments over reunification; more than 100,000 jobs vanished in the 1990s. But with its history and energetic personality, the city also seems an anomaly.

Geographically in the East, the town's psyche fits comfortably into the West, sort of like a Cold War double agent. Since German reunification in 1990, BMW and Porsche moved factories here, DHL opened a transportation hub, a soccer stadium was built for the 2006 World Cup and the centuries-old Art Academy and trade fairs gained international renown. 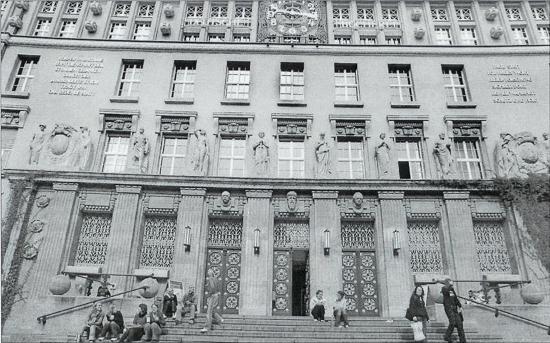 RICH IN HISTORY: The German Library in Leipzig, a city whose intellectual and musical character was shaped by the likes of Martin Luther, Johann Sebastaian bach an Johann Wolfgang von Gothe. The communists came over and, went but a penchant for commerce endured. 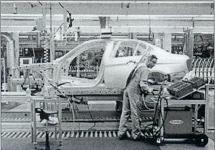 MOTOR WORKS: BMW was among those to set up shop in Leipzig after German reunification in 1990. Still, more than 100,000 Jobs vanished in the ensuing decade

Layered amid this stop-go economic revival is Leipzig University, which celebrates its 600th anniversary in 2009.

The intellectual and musical character was shaped by Martin Luther, Johann Sebastian Bach and Johann Wolfgang von Goethe, whose "Faust" is memorialized in a statute outside Auerbachs Keller beer hall. Like Faust's bargain with the devil, Leipzig's soul is roused over what to preserve and what to forgo in the journey toward reinvention.

Helga Hassenrueck is a professor with a gift for stinging adjectives. There is a mood of requiem in her office at the organization to rebuild St. Paul's Church (Paulinerkirche), which was part of the university until the communists blew it up in 1968.

The university doesn't want a cathedral and plans to construct a large secular hall that will resemble a nave but hold none of the icons saved from St. Paul's.

"By not rebuilding the church you wipe away the history of Bach and Mendelssohn," Hassenrueck said.

Another member of the church committee, Daniel Fickenscher, said: "We're a town that doesn't know its values. We haven't fully overcome communism. We're always having the discussion of who we are. When we made a bid for the Olympics, we were all Olympians. When we built the World Cup stadium, we were all soccer fans. Now soccer is over and there's no identity. We have no idea of the future except to move on."

The future is a few blocks away in Holzer's office, where a model of his anti-virus technology, SaferSurf, blinks like a florescent octopus in a glass case. He was raised in the East, and unlike much of it, he said, Leipzig is less sullen, more innovative, and its citizens more likely to smile at you. He moved the company of 15 employees from nearby Halle to Leipzig in 2001.